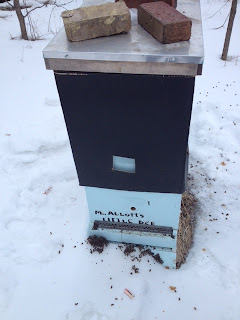 I always get antsy in February about the girls. Did they make it? How many colonies will I be managing this spring? If they died, how did it happen, did they freeze or starve? What could I have done differently. So much is at stake. In my head I have created this idea that the mark of a real legitimate beekeeper is one who can overwinter her colonies.

Now I am smart enough to know that there factors way beyond my control that determine if the girls will make it or not but emotionally I am tied to the idea that if the they survive I have accomplished something big.

The Buddhist in me takes the responsibility of beekeeping seriously. I care deeply about the well being of my bees and while I am painstakingly mindful and deliberate about my actions in the bee yard there are occasional casualties and sometimes even deliberate actions that result in a necessary loss. I try and minimize those losses and go about my beekeeping in a manner that reflects compassion and care.

Last year we overwintered two colonies of bees. We were giddy last January when we found one colony thriving. We had not left much honey for them, nor had we taken much. We didn't have much to work with but we wanted to try. Of course there were three more months to go when we found those girls last January. We ordered sugar boards to hold them over through February and March and we started feeding them in April. When we went back a few weeks later we discovered the second colony had survived, we just hadn't gone deep enough in the boxes to find the cluster. Through a combination of good karma and good beekeeping they all made it.

Mr. Abbott's Little Bee came out of one those overwintered colonies last summer, genetically related to the ill tempered Turquoise Bee. The bees came from the Turquoise Bee but they got a new queen and an opportunity to sever their lineage. But you might remember the queen mayhem that ensued. Two queens running amok for over a month and then the new queen disappeared leaving the colony with a new queen the bees had raised from original Turquoise Bee brood and thus poor genetic fate. They struggled all summer, never produced a lick of honey and it wasn't until September that the population started to mount. It was hard to convince ourselves to attempt an overwintering plan for them but we did. We moved a few frames of honey from other hives into the colony, put them to bed and hopped for the best.

Then there was Katrina's Drone Den, a strong group of girls who had produced well over the summer. Her sister colony Colleen's Royal Ruckus had absconded late in the fall, probably infested with mites. We could have checked the mite load in Drone Den but it wouldn't have swayed us, we needed to try and overwinter them. We left them with a full box of honey, probably not enough but more that we had left in our previously overwintered colonies. We could do the same thing as the year before and order sugar boards if need be.

Paula and I went down to check on the bees today. We should have gone in January but it was too cold to open the hives. Even today was too cold but if there was any chance they were alive we needed to know and get food stores on the hives.

I just love going into the bee yard no matter what time of year. It is a place of solace and calm for me. We worked our way through the snow with our shitkicker boots, veils and hive tools. It was cold, we had to move quickly.  We started with Katrina's Drone Den. Nothing in the first or second box but we'd learned our lesson last January,  and  worked our way to the bottom box.  I was  hopeful at first, no dead bees piled up outside the hive. Right way though we found large clumps of dead bees on frames right next to large patches of honey. In fact it seemed like the top box was just as we left it, full of honey. Clearly the bees had frozen, unable to move to the honey on the frame. It was as though the cluster had busted up in a frantic moment and they were spread all over just frozen in place. Sad really, knowing they couldn't move to get to the honey. A total dead-out.

Mr. Abbott was a slightly different story.  You can see in the picture a large pile of bees outside the hive and dead bees scattered all about just outside the hive, tell tale signs of a dead-out. Since there wasn't much honey in that hive its hard to know what happened. They may have starved, they may have frozen, not enough clues to make a deduction.

Two total dead-outs and two sad beekeepers.  What can I say, grim day for us. We have three new packages coming and I am going to try and find a forth package between now and April. In the mean time we have a heck of a clean up job facing us. Last fall I piled all of our equipment in my basement storage locker without cleaning any of it. I knew I would regret that come spring and I sure do. It will take days to clean the boxes, repaint some of them and get organized for the April 6th arrivals. We also have to clean up the dead-outs which is never easy. Such is the business of beekeeping. I am going to re frame all of this and look forward to a fresh start! All new colonies, and more than likely we will be starting each of them on frames that have been completely combed out which will give every colony a kick start. We minimize our swarm risk and hopefully maximize our honey production. So chin up,  all is good at The Flight of The Turquoise Bee Apiary!

sweetpea
St. Paul, MN, United States
five years ago I took up the adventure of beekeeping. I keep bees for the magic of utterly unexpected moments filled with challenge and hope; disappointment and giddy joy. I keep bees for the hope that they will temper my hyperactive spirit and lead me to a more deliberate, mindful and contemplative life. This blog has evolved from Sweetpea's Gluten-free Kitchen to a place I hope to chronicle my antics with the honey bee. Every now and again I will muse about my kitchen but for now its all about the bees.

Thanks to my partner for helping with some of the technical issues on the blog and occasional help in the bee yard. I am grateful beyond measure to my beekeeping partner Paula who is on this journey with me.