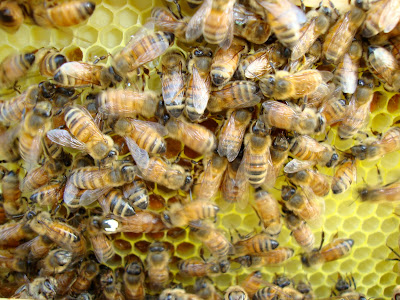 I had a panic attack last night. I'll admit, I am prone to anxiety but I have not had full blown panic attack since going to a Melissa Etheridge concert about 7 years ago. We spent over 24 hours getting home from Istanbul and arrived home exhausted and hungry at midnight. I took a shower, ate some pizza and was in bed by 1230. At 1:15 I woke up with excruciating Charlie Horse pain that was completely paralysing in my right calf and foot. It was so intense and relentless that I started to panic. Initially I thought maybe I was having a pulmonary embolism until it started in the left leg. You can understand the logic; nurse with a little too much knowledge after a long plane ride combined with my anxiety, of course it made since to go straight to a PE. The pain went on for probably 10 minutes out of every hour for the next three hours, in both of my feet and legs. I was out of my mind by 6:00 am that I got up and sent a text to my beekeeping partner hoping to move up our trip to the bee yard. Maybe the bees would calm me down.

Mission accomplished. I don't know how they do it but here I am calm as a cucumber and no more muscle spasms. Gotta love the bees.

So the girls, what the heck? Lets start with Mr. Abbott's Little Bee. You might remember from my last post that it seemed the Queen may have gone missing. While we were gone Paula went down to check on them and found a whole lot of nothing in the box but spotted a big huge unmarked Queen. We had a Yellow Lady in that hive and saw her last on May 28th. I can't imagine she went missing and all that magic occurred. More likely she lost her marking. Anyway, the brood pattern seems to be slightly improved but the population is still low and there isn't much going on. These girls better hurry up and get to it!

Before I left I threw supers on all the hives, two each. In the two weeks I have been gone they have not done a darn thing. No comb, no nectar, no pollen, nothing to show for their time, save a bunch of burr comb in Katrina's Drone Den. I know we had a run of rain, wicked storms that knocked out a third of the farming crops in Northfield but seriously, nothing?  In addition they are not living up to their names which is good in some cases and in others no so good. For example, Katrina's Drone Den is hardly such which is a good thing but she seems to have the genetics of her cousins over in Crazy Comb. We had to clean out a tun of burr comb all over her today. We did see her Queen who seems to be loosing her white marking as well, half of it gone which is why I think maybe the marking came off the Queen in Mr. Abbott. Colleen's Royal Ruckus is hardly a ruckus. She if full of the best tempered bees ever and her Queen is going about her business. Now if only the girls would get working.

We have to reschedule our Puja as an important Tibetan Community event came up for the Monks. To be honest, as much as I was looking forward to the event I am so whipped from our trip that it feels more than just fine. When I told our land owner he was a little disappointed since the storms have taken a huge toll on his property and could really use the blessing right now! We are going to give the bees at least 10 days before checking on them again. Keep your fingers crossed I don't want another summer of slacker bees.
Posted by sweetpea at 2:50 PM 1 comment:

Awww Mr. Abbott What Have You Done With Your Queen? 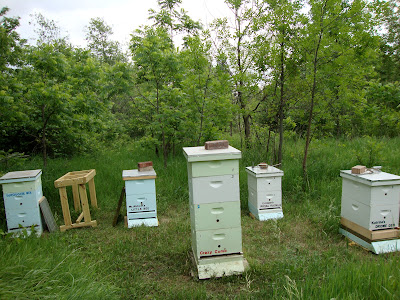 I want to swear. Two days until I leave for Budapest and Istanbul and Mr. Abbott's Little Bee is misbehaving! All the tell tale signs are there of a queen gone missing. I am trying not to rush to judgment but I have seen this before in a slightly different context.

I am solo this week. Paula is vacationing in Jordan so I have been managing the apiary myself for the past two weeks. No big deal but I miss her input. Two bee geek brains are better than one.

It was a beautiful early morning, the rooster was out. The moon was setting in the west and the sun was rising into a clear blue sky. It was cool and breezy and I had a lot to do! There is a nectar flow on right now and I don't want to miss a drop! Plus I wanted to clean up the bee yard before the Tibetan Monks come down for the Puja in a few weeks.

Our two new hives, Katrina's Drone Den and Colleen's Royal Ruckus were very docile, thank you nectar! Both have beautiful brood nests and both queens have moved up to the second brood box. Their population is good! Nothing was drawn out in their supers but I went ahead and added second supers to each. Between the warm weather and the nectar flow they could build out quickly. I saw a brilliant orange pollen coming in as well. Its nice to see something other than the dandelion pollen. I was really pleased with what I found.

Moving on  to Mr. Abbott's Little Bee, you may remember this is our divide from The Turquoise Bee with a healthy new queen. I have been a little worried about this hive as population has not been great but last week it seemed to have perked up a bit. I noticed a slight improvement in the colony population and mediocre brood and spotted the queen. One week later and the little buggers are hissing and agitated, the brood pattern is very spotty and I didn't see the Queen. I didn't look too hard for her. One of hardest lessons in this endeavor is listening to the bees and letting them dictate the work. As long as they are willing to let me poke my head around fine but not today. They were just too pissey for words. I looked through about four frames, took notice of the constant hiss and spotty brood pattern and closed up the hive. I am not sure what to do. It is possible there has been a recent hatch but I am guarded! More than likely I will go back on Thursday and see if I can do a better inspection and really look for The Yellow Lady.  Otherwise Paula is simply going to have to deal with them when she gets back.

The Turquoise Bee and Crazy Comb are both doing well. Beautiful brood in all the brood boxes and I caught a glimpse of Snow White in The Turquoise Bee. She also has one supper that is completely drawn out so I threw on another box. Crazy Comb isn't drawing out in the super box yet but I added a second one on her as well for good measure.

It took close to two hours to get my work done and two complete burns in the smoker which is on its last leg. I am going to have to replace the smoker soon. When I was done I stood admiring the bee yard wishing I had a chair to pull up and just watch the activity. It was such a beautiful day and outside the disappointment of Mr. Abbott's Little Bee I was feeling happy. We are much further along this year than any other year so the honey whore is hopeful! Unless I go back on Thursday for another look at Mr. Abbott's Little Bee I won't see the bees until we have the puja the end of June.
Posted by sweetpea at 4:58 PM 3 comments:

sweetpea
St. Paul, MN, United States
five years ago I took up the adventure of beekeeping. I keep bees for the magic of utterly unexpected moments filled with challenge and hope; disappointment and giddy joy. I keep bees for the hope that they will temper my hyperactive spirit and lead me to a more deliberate, mindful and contemplative life. This blog has evolved from Sweetpea's Gluten-free Kitchen to a place I hope to chronicle my antics with the honey bee. Every now and again I will muse about my kitchen but for now its all about the bees.

Thanks to my partner for helping with some of the technical issues on the blog and occasional help in the bee yard. I am grateful beyond measure to my beekeeping partner Paula who is on this journey with me.